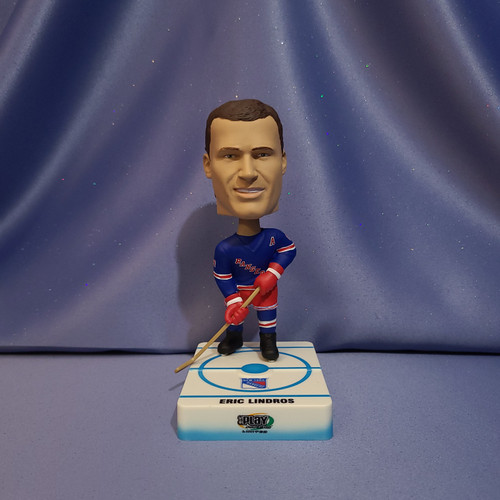 Upper Deck Limited - Eric Lindros Hockey player Bobblehead from Play Makers - New York Rangers. 2001 - 2002. Eric Lindros joined the New York Rangers via a trade in August 2001. Bobby Clarke eventually traded Lindros to the New York Rangers on August 20, 2001, in exchange for Jan Hlaváč, Kim Johnsson, Pavel Brendl and a 2003 third-round draft choice (Štefan Ružička). In 2001–02, Lindros averaged a little over a point a game with 37 goals and 36 assists for 73 points in 72 games. His impressive start also led to his seventh and final All Star selection, but due to an injury he was unable to participate and was replaced by teammate Mike York. Though 2002–03 was the first injury free season of his career, he struggled to match his previous season, scoring just 53 points in 81 games. In 2003–2004, Lindros' eighth concussion limited him to just 39 games, though he did collect 32 points. He again became an unrestricted free agent after the season.. Eric Lindros then signed with the Toronto Maple Leafs for the 2005–06 season. This Eric Lindros Bobblehead measures approximately 7 inches tall. Made in 2002. Made / Printed in China. This item is collectible and it is in new condition. New in box. (Box has minor wear.) Please see photos. MINT - The item is in perfect condition.