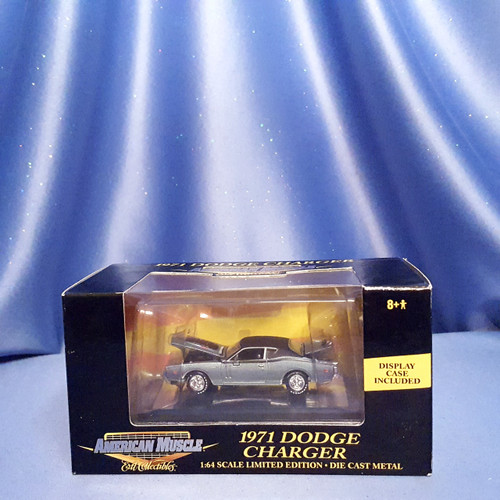 1971 Dodge Charger - American Muscle - Racing Champions - Ertl Collectibles. Made in 2001. Detailed interior and chassis. The hood and trunk opens. Display case included. Comes in dark grey color as a 1:64 scale. Third generation: 1971–1974 The third generation Charger was introduced for the 1971 model year. Chrysler's B platform was modified to meet new emissions and safety regulations. Available in six different packages with cosmetic changes that include: a split grill, semi fastback rear window, and a ducktail spoiler. The 1973 and 1974 Chargers were very similar to the 1971 with minor differences in the grill and headlamps. The increase in sales was mostly due to the elimination of the Dodge Coronet, which meant Dodge offered the two door intermediate size body style only as the Charger. This collectible item is brand new and in sealed condition. In original packaging. (Box has minor wear) Please see photos. BRAND NEW - Conspicuously new and unused.