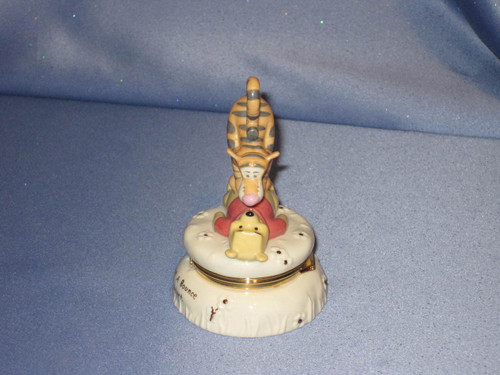 This is "The Bouncy Pouncy" Treasure Box by Lenox. Here are two fine collectibles in one: Disney's Winnie the Pooh and Tigger appear together on a keepsake box of Lenox Treasures fine china. Tigger loves to bounce and his latest one has landed him on top of his friend Winnie the Pooh, nose to nose. A splendid sentiment, "Friends put a bounce in your heart," is inscribed in 24K. gold on the front of the box along with other embellishments. The hinged lid is fitted with a golden Lenox signature clasp. Inside you will find a lovely gold color charm of a butterfly. A little bit about Winnie then Tigger. First, Winnie the Pooh: He is described as being stuffed with fluff, as well as being "a bear of very little brain." He is generally kind and friendly towards everyone; he is also very childlike and likable. He can be very courageous in tough times and is consulted when trouble occurs. Pooh is also known for his love of honey (or "hunny" as he spells it). He keeps a supply of pots at his home, but they are often empty due to his appetite. When he runs out, he often travels to Rabbit's home to borrow some or sometimes goes to a beehive to get some from the bees. Loyal to his friends and often entitled to "leader of the group". Pooh has a knack for being very optimistic during times of despair. Out of all the animals, Pooh is the one who is the closest to Christopher Robin. He is also shown to be very forgetful and slow on the uptake. And second, Tigger: He is arguably the most eccentric member of the Hundred Acre Wood. Overly energetic, reckless, and fairly thoughtless, Tigger is somewhat of a trouble-maker and causes a fair share of mishaps for both himself and his friends. To his core, however, Tigger is extremely loving and friendly; he means well and tries his best to be of support toward his friends, even if his efforts ends in some form of misfortune. He can also be considered the most social of the animals and is exceptionally eager to have his friends join in on his personal joy. Two handsome, the best of friends will hold your small valuables. Made Lenox for Disney, one truly charming treasure box. This fun piece measures 3 3/4 inches tall by 2 3/8 round. Offered with COA. This fine item is collectible and it is in like new condition. No original box. Please see photos. MINT - The item is in perfect condition.

Treasure Box - Month of April with Diamond (Artificial) by Lenox.