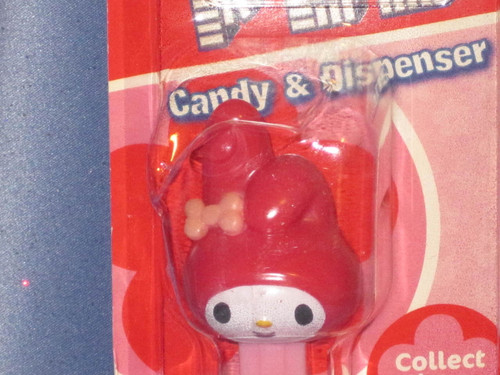 This is a Sanrio Hello Kitty "My Melody" Candy Dispenser by PEZ. 2005 This adorable item is a Sanrio Hello Kitty My Melody is a little girl rabbit who always wears a red or pink hood that also covers her ears. Her birthday is January 18. Like Hello Kitty, My Melody is rather popular in Asia and can be found on children's toys and merchandise. My Melody was first released in 1975 and the first related merchandise was released at the end of that year. At first she was mostly marketed toward young girls, but like Hello Kitty her popularity has increased within women of all ages, especially in Asia. According to The New York Times, this character is "moderately successful" in terms of popularity but shows no signs of reaching the global popularity of Hello Kitty. My Melody's popularity waned toward the late 1980s, and the only goods produced were stationery and candy. In 1996, according to a Strawberry News (a magazine published by Sanrio) reader survey, My Melody came out amongst some of Sanrio's most popular characters and as a result, due to popular demand, standard merchandise started re-appearing beginning in February 1997 featuring the original red hood. Goods with the pink hood were re-released in 1999 and as of 2000 there were goods released with multiple color hoods. My Melody has been turned into a Pullip doll, like two other Sanrio characters, Hello Kitty and Cinnamoroll. The doll includes a toy of Flat the mouse. My Melody also appears in the Sanrio Digital and Dream Cortex series, The Adventures of Hello Kitty & Friends. She, however, is mouthless there, and her rival doesn't make an appearance. In 2007, A second game was released for the Nintendo DS titled My Melody Angel Book. The game's primary function is as a day planner designed for young girls to keep track of appointments, class schedules, and mini diary entries. On March 1, 2008, Mattel released a Barbie doll named "My Melody". The My Melody Barbie doll featured a Barbie doll inspired by the My Melody character, with the character's face included in different parts of the doll's fashion and accessories. In an homage to the character's rabbit ears, the doll's hair is styled in pigtails. On March 26, 2008, a Japanese music compilation album titled "I LOVE 30 - MY MELODY" from Tearbridge Records was released with "My Melody" wearing the original red hood drawn in various artwork styles by Groovisions. She is voiced by Rei Sakuma in the anime. In October 2010, she was sold as a plush toy at Build-A-Bear Workshop stores to celebrate Sanrio's 50th anniversary, along with other Sanrio characters. In 2014, Sanrio celebrated the character's 40th Anniversary by creating a special line of merchandise where she is given a different hood where her ears are dropped down and wears either a bonnet or a flower pin and sometimes depicted with eyelashes. Sanrio Puroland honored the 40th anniversary of the character by creating indoor ride called "My Melody Drive" where visitors are visiting Maryland and encounter My Melody and her friends including Kuromi who attempts to ruin her day. Includes 3 rolls of PEZ candy. Please do not eat the candy since it is many years old. Just the right find for PEZ Collectors. Made in Hungary between 1991 and present. With feet. Measurements are: 4 1/2 inches tall by 1 1/4 inches wide by 1 1/4 inches deep. This collectible item is sealed in new condition. New on card. (Card has minor wear.) Please see photos. MINT - The item is in perfect condition. Note: A PEZ Hello Kitty "Chocolat" Candy Dispenser is available at NaTG.