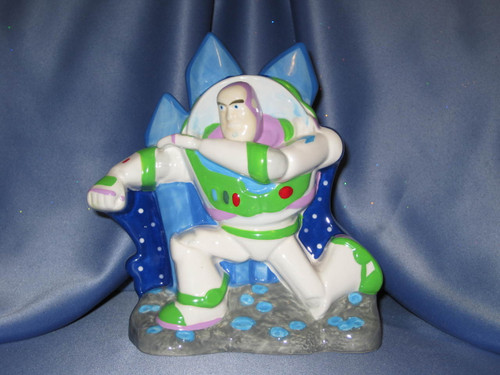 This is a really cute. Toy Story's Buzz Lightyear, a ceramic Coin Bank by Disney/Pixar. Licensed by Enesco Group, Inc. Buzz is a universal space ranger from the Intergalactic Alliance and is stationed in the Gamma Quadrant of Sector 4. He is the captain of the Alliance's team. Lightyear is known for his bravery and courage. Buzz believes that following rules are the way people should live their life. There are rare moments when Buzz will bend the rules or tell a cover story if he needs to when he knows it is the right thing to do. Though a great leader, at times he can be rather unemotional, one of his biggest character flaws. Buzz is said to be Emperor Zurg's son (à la Star Wars Episode V: The Empire Strikes Back) as mentioned in Toy Story 2, but in Buzz Lightyear of Star Command, this is revealed to be a taunt intended to catch Buzz off guard. Either way, this shows that Buzz does not know his father. Buzz is trained in several forms of martial arts and is a highly skilled warrior in hand to hand combat. Being in peak physical condition, Buzz makes a perfect space ranger and is an example to many. Buzz, like many characters in Toy Story, is a complicated one, who feels genuine emotions such as pride, anger, depression, and sadness, much like a regular human and these are traits which he shares with his best friend, Woody, however, one would say that Buzz is better at keeping his emotions in check. A key factor of Buzz's personality is that it is divided by several aspects; demo, play, and Spanish. About his alter ego In Toy Story 3, Buzz Lightyear is shown to have two alternate personalities; delusional and Latin lover. This amazing money holder is not in like new condition, used slightly and does show some light crazing. This item is in gently used condition. Please see photos. GOOD - The item will have had more use, showing obvious imperfections.