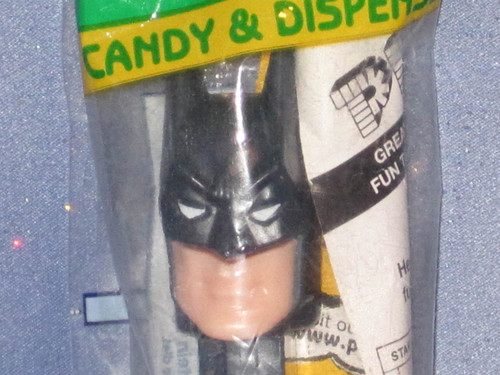 This is a "Batman" Candy Dispenser by PEZ. This fine item is from the Batman and Villains dispenser set. This set includes a revised Batman, Riddler, Joker and Two Face dispensers. Awesome addition for Super Hero fans, DC comic fans. Batman is a fictional superhero appearing in American comic books published by DC Comics. The character was created by artist Bob Kaneand writer Bill Finger and first appeared in Detective Comics #27 (1939). Originally named the "Bat-Man", the character is also referred to by such epithets as the Caped Crusader, the Dark Knight, and the World's Greatest Detective. Batman's secret identity is Bruce Wayne, a wealthy American playboy, philanthropist, and owner of Wayne Enterprises. After witnessing the murder of his parents Dr. Thomas Wayne and Martha Wayne as a child, he swore vengeance against criminals, an oath tempered by a sense of justice. Bruce Wayne trains himself physically and intellectually and crafts a bat-inspired persona to fight crime. Batman operates in the fictional Gotham City with assistance from various supporting characters, including his butler Alfred, police commissioner Gordon, and vigilante allies such as Robin. Unlike most superheroes, Batman does not possess any superpowers; rather, he relies on his genius intellect, physical prowess, martial arts abilities, detective skills, science and technology, vast wealth, intimidation, and indomitable will. A large assortment of villains make up Batman's rogues gallery, including his archenemy, the Joker. Includes 1 roll of PEZ candy. Please do not eat the candy since it is many years old. Just the right find for PEZ Collectors. Made in Hungary between 1991 and present. With feet. Measurements are: 4 3/4 inches tall by 1 inches wide by 1 1/4 inches deep. This collectible item is sealed in new condition. New in bag. (Bag has minor wear.) Please see photos. MINT - The item is in perfect condition. Note: We also have Riddler, Joker and Two Face on a card, new and available in the NaTG store.