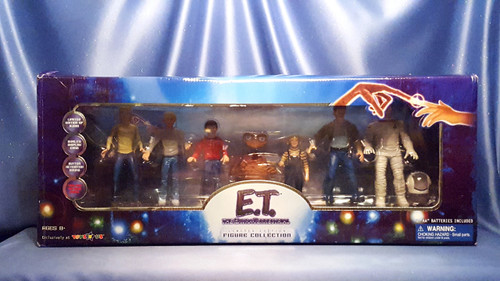 E. T. Extra Terrestrial Limited Edition Figure Collection. This is a collection of seven fantastic characters that were in the movie ET The Extra Terrestrial. They are housed in an acrylic box that has an engraved plaque that reads “ET The Extra Terrestrial Limited Edition Figure Collection Series I, 1 of 8,000”. This 20th Anniversary plaque comes with a button activitated music. Manufactured by Pacific Playthings. A Division of TRU (HK) Ltd.. Distributed by Toys "R" Us. Made in China. Circa 2001. Bring the magic and excitement of E. T. The Extra Terrestrial into your world. As your friendship with E. T. grows, relieve all of your earthly encounters or look to the stars and create your own unforgettable interactive adventures, with E. T., the possibilities are endless... E.T. the Extra Terrestrial is a 1982 American science fiction film co produced and directed by Steven Spielberg, and written by Melissa Mathison. It features special effects by Carlo Rambaldi and Dennis Muren, and stars Henry Thomas, Dee Wallace, Peter Coyote, Robert MacNaughton, Drew Barrymore and Pat Welsh. It tells the story of Elliott (Thomas), a lonely boy who befriends an extraterrestrial, dubbed "E.T.", who is stranded on Earth. Elliott and his siblings help E.T. return to his home planet, while attempting to keep him hidden from their mother and the government. Three (3) "AA" batteries are included. Measurements are: 9 1/8 inches tall by 23 1/2 inches wide by 5 1/4 inches deep. This item is collectible and it is in like new condition. In original box. (Box has minor wear.) Please see photos. MINT - The item is in perfect condition.