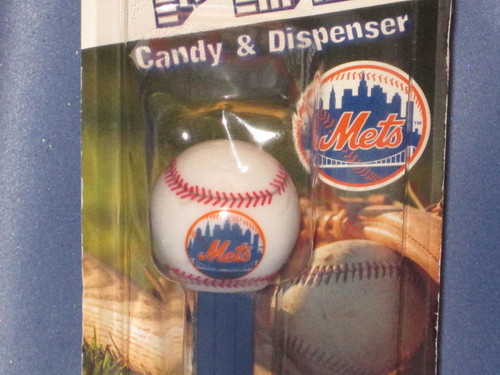 This is a New York Mets "Baseball" Candy Dispenser by PEZ. 2009 This piece is being released with a different version of the New York Yankees and New York Mets in addition to other AL and NL baseball teams. This is a Pez Baseball Head, a MLB fanatic item of the New York Mets: Who are an The New York Mets are an American professional baseball team based in the New York City borough of Queens. The Metropolitans compete in Major League Baseball (MLB) as a member club of the National League (NL) East division. The Mets are one of two Major League clubs based in New York City; the other is the New York Yankees. One of baseball's first expansion teams, the Mets were founded in 1962 to replace New York's departed NL teams, the Brooklyn Dodgers and the New York Giants. The Mets' colors are composed of the Dodgers' blue and the Giants' orange, which also form the outer two bands of the New York City flag. During the 1962 and 1963 seasons, the Mets played their home games at the Polo Grounds. From 1964 to 2008, the Mets' home ballpark was Shea Stadium. In 2009, they moved into their current ballpark, Citi Field. In their 1962 inaugural season, the Mets posted a record of 40–120, the worst regular season record since MLB went to a 162 game schedule (two games were canceled). The team never finished better than second to last until the 1969 "Miracle Mets" beat the Baltimore Orioles in the 1969 World Series in what is considered one of the biggest upsets in World Series history. Since then, they have played in four additional World Series, including a dramatic run in 1973 that ended in a seven-game loss to the Oakland Athletics, a second championship in 1986 over the Boston Red Sox, a Subway Series loss against their cross-town rivals the New York Yankees in 2000 and a five game loss to the Kansas City Royals in 2015. The Mets qualified to play in the Major League Baseball postseason in 2006, when they came within one game of the World Series, losing to the eventual champion St. Louis Cardinals in the NLCS. The Mets missed the playoffs with losses on the last day of the regular season in 2007 and 2008. The Mets made the playoffs in 2015 for the first time in nine years, and won their first NL pennant in 15 years. The team again returned to the playoffs in 2016, this time with a wild card berth. This was the team's second back-to-back playoff appearance, the first occurring during the 1999 and 2000 seasons. Includes 3 rolls of PEZ candy. Please do not eat the candy since it is many years old. Just the right find for PEZ Collectors. Made in China between 1991 and present. With feet. Measurements are: 4 1/4 inches tall by 1 1/4 inches wide by 1 1/4 inches deep. This collectible item is sealed in new condition. New on card. (Card has minor wear.) Please see photos. MINT - The item is in perfect condition. Note: The New York Yankees and the Boston Red Sox PEZ "Baseball" are available at NaTG.