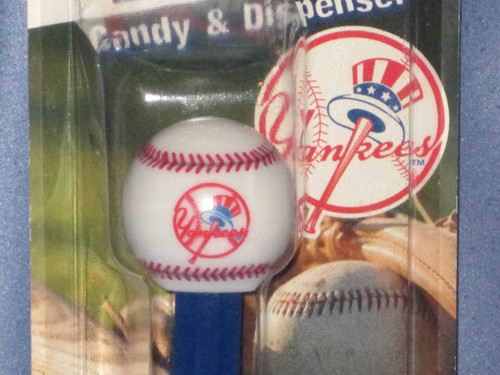 This is a New York Yankees "Baseball" Candy Dispenser by PEZ. 2009 This piece is being released with a different version of the Boston Red Sox, New York Mets in addition to other AL and NL baseball teams. This is a Pez Baseball Head, a MLB fanatic item of the Boston Red Sox: Who are The New York Yankees are an American professional baseball team based in the New York City borough of the Bronx. The Yankees compete in Major League Baseball (MLB) as a member club of the American League (AL) East division. They are one of two major league clubs based in New York City, the other being the New York Mets of the National League. In the 1901 season, the club began play in the AL as the Baltimore Orioles (no relation to the modern Baltimore Orioles). Frank Farrell and Bill Devery purchased the franchise (which had ceased operations) and moved it to New York City, renaming the club the New York Highlanders. The Highlanders were officially renamed the Yankees in 1913. The team is owned by Yankee Global Enterprises, an LLC controlled by the family of the late George Steinbrenner, who purchased the team in 1973. Brian Cashman is the team's general manager, and former catcher Joe Girardi is the team's manager. The team's home games were played at the original Yankee Stadium from 1923 to 1973 and from 1976 to 2008. In 2009, they moved into a new ballpark of the same name after the previous facility was closed and demolished. The team is perennially among the leaders in MLB attendance; in 2011, the Yankees had the second-highest attendance. One of the most successful sports clubs in the world, the Yankees have won 18 division titles, 40 AL pennants, and 27 World Series championships, all of which are MLB records. The Yankees have won more titles than any other franchise in the four major North American sports leagues. Forty-four Yankees players and eleven Yankees managers have been inducted into the National Baseball Hall of Fame, including Babe Ruth, Lou Gehrig, Joe DiMaggio, Mickey Mantle, Yogi Berra, and Whitey Ford. In pursuit of winning championships, the franchise has used a large payroll to attract talent, particularly during the Steinbrenner era. According to Forbes, the Yankees are the second highest valued sports franchise in the United States and the second in the world, with an estimated value of approximately $3.7 billion. The Yankees have garnered enormous popularity and a dedicated fanbase, as well as widespread enmity from fans of other MLB teams. The team's rivalry with the Boston Red Sox is one of the most well-known rivalries in U.S. sports. Includes 3 rolls of PEZ candy. Please do not eat the candy since it is many years old. Just the right find for PEZ Collectors. Made in China between 1991 and present. With feet. Measurements are: 4 1/4 inches tall by 1 1/4 inches wide by 1 1/4 inches deep. This collectible item is sealed in new condition. New on card. (Card has minor wear.) Please see photos. MINT - The item is in perfect condition. Note: The Boston Red Sox and the New York Mets PEZ "Baseball" are available at NaTG.