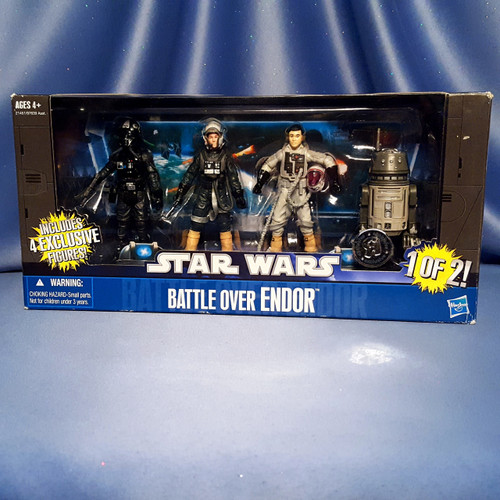 General Analysis: Bravery. Skill. Loyalty. These are defining characteristics of the starfighter pilots on both sides of the conflict at the Battle of Endor. Whether they are Rebels or Imperials, these elite pilots are all focused on the same goal: victory. They are deeply aware that they are deciding the future of the galaxy, and will do everything they can to complete their mission.

In the Battle Over Endor (1 of 2) set there is really only one filler figure. Lt. Oxixo (TIE Fighter Pilot), but there may be a large group of Star Wars fans who feel otherwise about this. It is the same Imperial TIE Fighter sculpt we have seen 100 times before, but the figure has an all-new helmet design that has not been released before. Lt. Oxixo can be seen in Star Wars Episode IV: A New Hope in the brief dogfight when the Millennium Falcon escaped the Death Star. He is also famous for having "Star Wars '76" inscribed on the brow of his helmet. The figure is a repaint of the Imperial Pilot (TIE Fighter) from 2009's LC Imperial Pilot Legacy (Series II) Walmart exclusive Evolutions set. This time around Hasbro has painted a silver “Mohawk” on his helmet. We still wish that Hasbro would make a super articulated version of the Imperial TIE Fighter Pilot because we are long overdue to receive one. This figure needs better sculpted legs that aren’t so close together and articulated ankles. Hopefully we are not too far away from one. Sila Kott (Red Two) (A-wing Pilot) is another wonderful addition to the basic figure line. To be quite frank, the sex of this pilot has been a great debate. Hopefully this action figure resolves this issue. We see the shadow of facial hair on close-up movie stills from Episode VI, yet the facial structure of the “actor” and especially the action figure look extremely feminine. (Not that this truly matters of course, but it does cause some confusion.) The body looks to be a closer match to Jake Farrell (from the Rebel Pilot Legacy) (Series III) or Arvel Crynyd from 2008's TLC Green Leader’s A-wing Fighter (also a Walmart exclusive). These figures slightly vary from 2007's TAC Tycho Celchu (A-wing Pilot) (30 44) figure a little bit (but not much). The paint job is beautiful and the details on the figure’s helmet are wonderfully executed.

The last two figures in the Battle Over Endor (1 of 2) set are intended to interact with each other. Lt. Ekelarc Yong (Gray Three) (Y-wing Pilot) is worthy of basic figure release thanks to a wonderful sculpt, likeness and stunning paint job. Hasbro captured every single detail of his detailed helmet and it fits and locks on his head perfectly. While the body isn’t anything new and have seen it many times before, it seems almost as if Hasbro had Ekelarc in mind down the road because it seems it was destined for him. Clearly our most favorite figure in the set, it’s a shame that Ekelarc Yong died during this battle because he shines as a hero not only in the film but in the action figure line as well. Hasbro ensured that all the figures has accurate and well done paint operations in these sets, but Ekelarc’s reigns as the winning champion as far as we’re concerned. His accompanying astromech is R5-P9. We’re being upfront here, but R5-P9 might as well be considered an Expanded Universe figure because it’s impossible to see this droid in Return Of The Jedi. But according to reference materials, the action figure is an accurate portrayal of the astromech and Hasbro did a phenomenal job on this figure. R5-P9 is a rework of 2006’s TSC R5-D4 (SAGA 032) figure and this time done in the colors of R5-P9 which includes a gray dome and legs with forest green detail and a white body with gray detail. It also has a realistic dirty wash. The Battle Over Endor (1 of 2) is a must-have for us and we bet you’ll be able to enjoy many figures in it as well. The original price was reasonable, this 1 of 2 exclusive piece became highly collectible while remembering you're getting four high quality figures here (and an overall high quality set). And it is our prayer that more continue because this is the way to treat collectors after years of loyalty to Star Wars. Thank you Hasbro. Still sealed, never opened. These items are collectible and are in new condition. New in box. (Box has minor wear.) Please see photos. MINT - The item is in perfect condition.