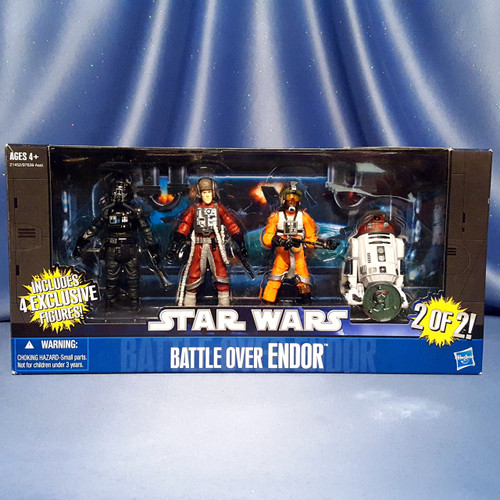 General Analysis: Bravery. Skill. Loyalty. These are defining characteristics of the starfighter pilots on both sides of the conflict at the Battle of Endor. Whether they are Rebels or Imperials, these elite pilots are all focused on the same goal: victory. They are deeply aware that they are deciding the future of the galaxy, and will do everything they can to complete their mission.

The Battle Over Endor Toys R Us exclusive four-packs are quite refreshing exclusive sets for many reasons. They offer unique Star Wars action figures that have not been made until now that utilize high quality base figure bodies. And then they are decorated wonderfully and it seems that Hasbro has raised the bar again to make sure their pilot figures are the best they can be. There are some collectors in the community who are literally exhausted with Imperial and Rebel pilots, but we just can’t get enough of them. We understand if you only need one B-wing pilot, but in an era of a bazillion Darth Vader and Clone Trooper action figures, we find unique pilots extremely refreshing. The base figure(s) from which Hasbro develops new figure concepts are of an exceptional quality and have more high quality articulation than we probably had ever expected. And if you had expected to receive these, then you are quite perceptive because Hasbro has always expressed that pilots are great, but not on their high priority list. Loosely based on scenes from Star Wars Episode VI: Return Of The Jedi, the Battle Over Endor (2 of 2) set is comparable in content and quality as the Battle Of Endor (1 of 2) set and also contains about 50% of characters that you can clearly see as well as the other 50% of characters that can pretty much be sourced to the Expanded Universe. Specifically, Palso Thern (Blue Seven) (B-wing Pilot) and Grizz Frix (Red Five) (X-wing Pilot) can easily be seen in Episode VI, while we have yet to locate Major Mianda (Scythe One) (TIE Fighter Pilot) and R2-T7 (Grizz Frix’s Astromech Droid) in the film anywhere. In fact, from what still and reference materials we could find that included Grizz Frix, we can only conclude that he had an R5 unit and not and R2 unit. So it’s really a stretch to consider R2-T7 as a character from Return Of The Jedi (right now) until better source materials are revealed.

It seems that Hasbro didn’t do their homework when it came to Major Mianda (Scythe One) (TIE Fighter Pilot). It’s a cool figure despite not being very accurate. Underneath his helmet is another clone head and if you check out the source materials on him, you can clearly see that he is not a clone. There are plenty of generic heads Hasbro could have used on this figure without worrying about tooling a new head, so we are a little bit disappointed that they didn’t do just a little bit more research before deciding on a final version of him. It also is the same old Imperial TIE Fighter pilot body so you know what to expect here. Mianda looks nearly identical to the figure included in the Imperial Pilot (TIE Fighter) from the Imperial Pilot Legacy (Series II) Walmart exclusive Evolutions set but this time there is different helmet deco and the “ace” stripes are a little blurry looking. This helmet design (or a variation of it) can be seen in Star Wars Episode IV: A New Hope, but it definitely is not seen in the movie cut version of Episode VI. There were a lot of cut scene for the Battle of Endor, so the possibility exists that Mianda’s appearance is laying on the cutting room floor somewhere. Palso Thern (Blue Seven) (B-wing Pilot) is one of the stars of the set. Hasbro created a near perfect likeness of this character and he can be clearly seen on the Home One tactical meeting. We don’t get a close-up shot, but we do see enough to determine that it is indeed him. The helmet looks fantastic and has a separately molded microphone attachment and it looks fantastic. The figure looks confident and unassuming and we love his slightly cocked posture. He fits into the line better than we ever expected and it is so nice to officially get our first movie-specific B-wing pilot as an action figure. He would make a great basic figure release in The Vintage Collection. As a result, we are inclined to make Palso Thern the definitive and modern replacement for the original 1984 B-wing Pilot Kenner action figure. There was supposed to be a much more developed B-wing battle in Return Of The Jedi where we supposedly would be able to see the pilots much more clearly (but we're not sure how much was filmed or if deleted footage exists.

Grizz Frix is the other star in the set. Another character from Episode VI that can be seen in a clear yet brief scene in the film, the action figure representation by Hasbro is nothing short of spectacular. Super-articulated and super detailed, Grizz Frix is one of the better X-wing pilots our collections have seen. Once again, Hasbro has designed an amazingly detailed helmet which leaves us speechless. It’s simply brilliant how Hasbro can include the tiniest of insignias on such a small surface area AND include a dirty wash. The straps on the uniform are very silvery and he comes with a blaster pistol which he can’t hold that well but we’re still glad he came with one. His flight suit is very bright orange and we wish Hasbro would tone it down a few shades, but it honestly doesn’t detract to much from the quality of the figure. Even just a few years ago, none of us probably expected to receive so many unique Rebel pilots. And with each release, Hasbro seems to make them better and better. Grizz Frix is one of their finer accomplishments and we could be more thrilled to see him join the ranks of the others we have so far. The only controversy of the set (and this greatly depends on what you define as a controversy) is the included astromech, R2-T7. InReturn Of The Jedi, we can barely see Grizz Frix’s droid (actually we cannot see the droid at all), but it looks to be the shape of an R5 unit (with a light colored dome no less). So it appears that R2-T7 may be incorrectly identified as Frix’s true droid. But Hasbro has all but come out and said that R2-T7 was their own concept anyway. The droid is pretty cool however. It’s simply painted with a black and red dome and an all-white body with black details. It utilizes the figure from 2005's TSC Early Bird Figures set. It’s hard to say which set is better than the other, but there is no doubt you will find things to like about both. The sets are reasonable in cost and it’s likely they will be scooped up by collectors at a very brisk rate. We suggest following in their footsteps. The original price was reasonable, this 2 of 2 exclusive piece became highly collectible while remembering you're getting four high quality figures here (and an overall high quality set). And it is our prayer that more continue because this is the way to treat collectors after years of loyalty to Star Wars. Thank you Hasbro. Still sealed, never opened. This item is collectible and it is in new condition. New in box. (Box has minor wear.) Please see photos. MINT - The item is in perfect condition.